This blog may contain affiliate links. If you choose to purchase something I recommend, I will earn a commission at no extra cost to you. But don't worry! I won't recommend anything I don't absolutely love.

Last week, Liam and I went to The Rooms. Located on top of the one big hill that is downtown, The Rooms is St. John’s’ largest and loftiest house of culture. The building itself is a piece of artwork on the face of the city, but the real beauty is inside. Equal parts art and history, the building’s interior is masterpiece in itself. 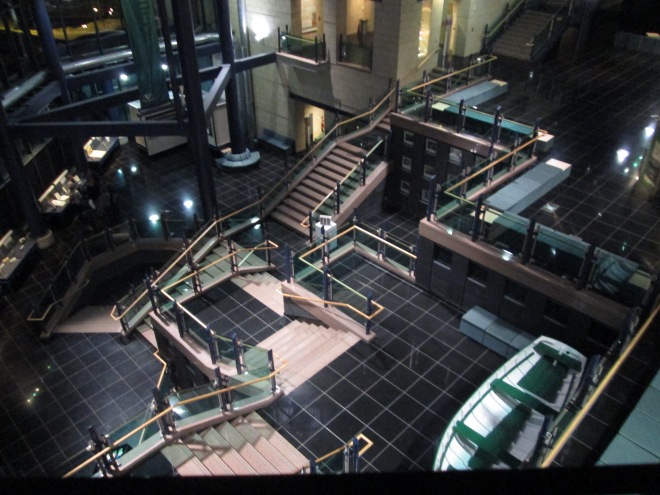 One of the things I like most about The Rooms is that it makes itself available to everyone.The entrance fees for any given day are certainly affordable. But every Wednesday evening, and on the first Saturday of every month, admission is free. (Wednesday evening is when Liam and I ended up going.)  Just don’t go on a Monday. They won’t let you in. (because they’re closed.)

After passing the friendly people at the admissions desk who handed us a guidebook, we climbed to the level 2 atrium. Currently there are displays pertaining to Newfoundlanders in the First World War. The photos, documents, and personal items are very interesting to look at. Liam and I spent a long time looking at the list of the “First 500” and comparing names and places to their relatives that we might know. (Newfoundland is not that small, but it is kinda small.)

Just up the stairs from this display is a collection of collages from artist Tanya St.-Pierre. Initially Liam and I were confused about what was happening in the photos, but one look in our booklet explained that the collages depicted and even romanticized the roles that Newfoundland and Labrador women took on during the world wars. They are very well-done collages, and will be on display until September if you’d like to take them in!

I’m not going to lie here. Our next stop was my absolute favourite part, because I’m a child at heart. We climbed up to the third level, and went directly to the Connections Gallery. The gallery displays a multitude of taxidermied animals, plants, sea life, and artifacts, giving you an up-close look at the life that shaped our province. 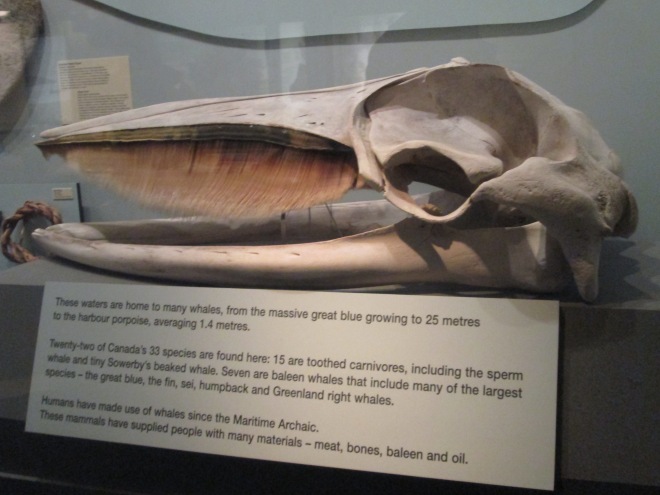 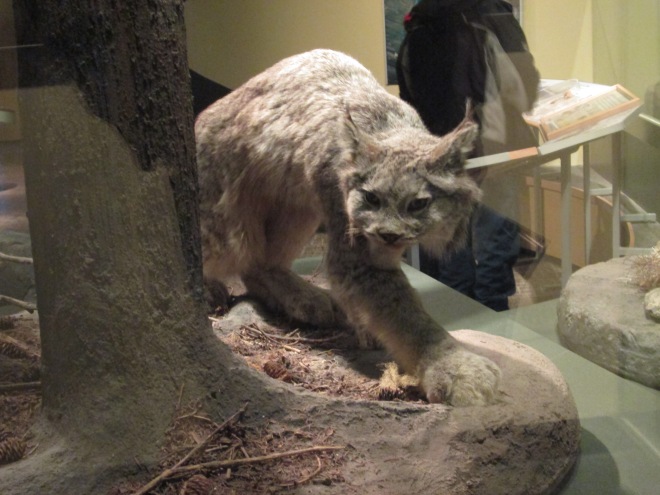 One of my favourite displays in this room was this one: 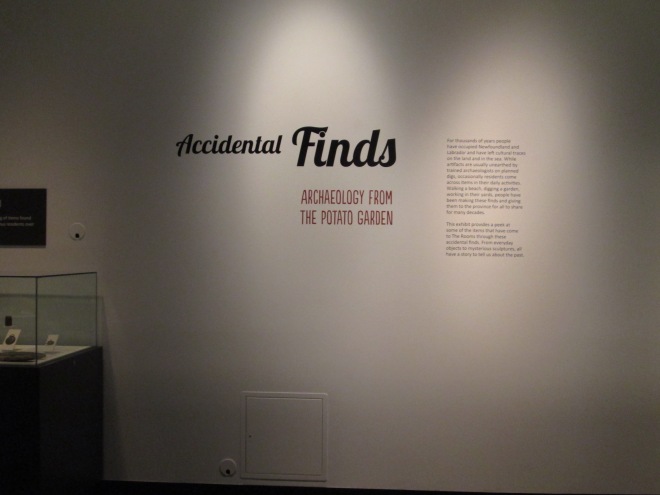 It was exactly what it sounds like: items that had been unearthed accidentally by local residents who were just looking to plant a few flowers or something. This display is on until November, and will probably tempt you to dig up your own yard. (I’d recommend waiting until summer though. The snow’s too gross right now.) To make the room even more enjoyable, we had a troop of Boy Scouts dashing around us with a scavenger hunt list. Super adorable.

From there we went to the level three art gallery to see Folklore And Other Panics. It featured many neat pieces, including a lovely quilt I would have loved to take home, some well dressed wolves, and an interesting interaction with Wikipedia. Apparently there are impromptu performances from time to time, but Liam and I had no such luck. But if you try your luck between now and the end of April, maybe you’ll be more successful. You’ll have to let me know how it goes.

Before we go any further, here’s my big secret: I’m not good at art. I’m one of those people who looks at it too hard and ends up looking right past what I’m supposed to see, then getting rotted about it and consoling myself with chocolate or something of the sort.

That being said, the next display I enjoyed, and here’s why: I freakin’ love hugs. Audrey Hurd’s display Until It Remembers You is an interactive room, with three different pillars. One is made of concrete, one of memory foam, and one of pliable plaster. They even provide jackets so you don’t ruin your clothes! Some sweet. I’ll go ahead and give you a little spoiler here: concrete doesn’t hug so well. But memory foam sure does. I couldn’t tell you about the plaster, because I was too busy watching a super adorable young girl and her father play around with the plaster on the pillar.

From there, we went to the level four art gallery, which featured Infrastructure Canada. It’s a multimedia display of architecture from across the country, including many photos and videos from our own province. It’s interesting to see and watch, for sure. For the first two minutes that Liam and I perused the display, I thought there was a narrated video, because I could hear the gentle voice of an older man talking. Then I turned the corner and realized there was a man sitting on the bench with a young relative, talking to him about the video they were watching. This display is on until mid-April, if you’re curious to see the growth of our province and country.

Our last stop was the level four museum area, with two permanent exhibitions: Here We Made A Home, and From This Place, Our Lives On Land and Sea. The first display shows our provinces ties to places like Ireland, Scotland, England and France. The second display explores the stories of Aboriginal Peoples who had made Newfoundland and Labrador a home long before anyone else. 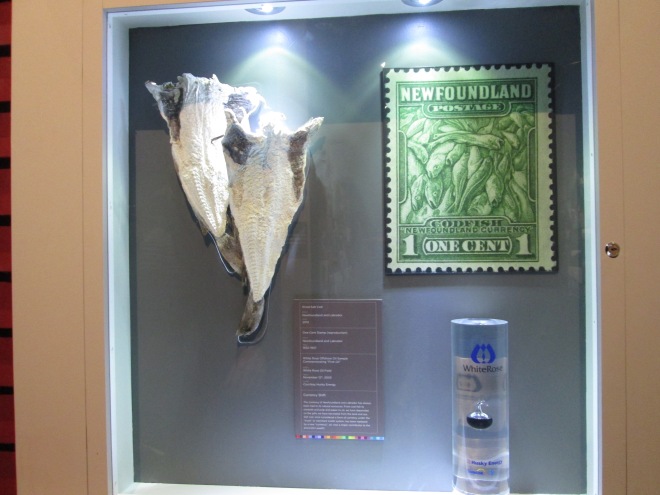 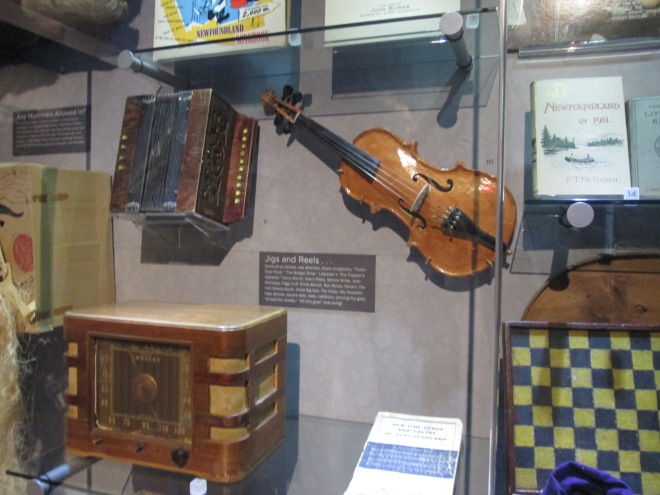 The only regret that Liam and I had was that we didn’t leave ourselves enough time to go to the café for a meal. That will have to be another entry for another day.

All in all, The Rooms is just stunning. And the best part is, it’s ever-changing. Do yourself a favour and explore it. Then when new exhibits come, explore it again. You will never be disappointed.

4 comments on “concrete hugs: a night at the rooms”

This site uses Akismet to reduce spam. Learn how your comment data is processed.

Nan-at-heart writing about my travels around Newfoundland and beyond.
Tea enthusiast. Pasta enthusiast. Colour enthusiast.
Hire me📝: @pinkandpurplepen

Today is #WorldwideKnitInPublicDay and it was *gor

This year for our birthdays, Liam and I decided to

Happy world pasta day! Here is a photo of my fav

It should come as no surprise that I follow a larg

What is your favourite breakfast food? I'm a suc

"When you float down a river, always bring an oar.